Nederland, Nijmegen, 21-7-2009Het is weer zover. Deelnemers aan de 4daagse, vierdaagse, lopen over de waalbrug richting Elst op de eerste dag van de 93e editie van dit wandelevenement.Foto: Flip Franssen/Hollandse Hoogte The International Four Day Marches Nijmegen (or Vierdaagse) is the largest marching event in the world. It is organized every year in Nijmegen mid-July as a means of promoting sport and exercise. Participants walk 30, 40 or 50 kilometers daily, and on completion, receive a royally approved medal (Vierdaagsekruis). The participants are mostly civilians, but there are also a few thousand military participants. In 2004 a restriction on the maximum number of registrations is set for the first time. The maximum number of 47,000 registrations then has been reached within 6 weeks. More than a hundred countries have been represented in the Marches over the years.The 90th Four Days Marches were very special. After one participant had died during the march and another after finishing the first walking day and a large amount of the walkers had needed help with heat-related problems during the march, the Four Days Marches were cancelled after one day.Foto: Flip Franssen/Hollandse Hoogte 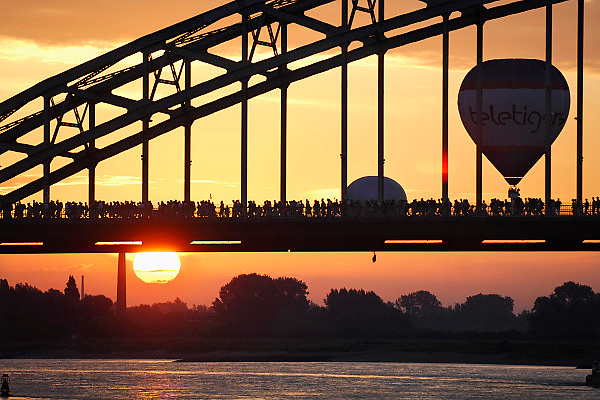